Roger Gunn, was a Human Resources professional for almost 30 years. He then used his knowledge of the profession to instruct at a post-secondary institute.

Roger is currently a labour arbitrator and workplace mediator. When not resolving conflict situations he can be found reading about or researching aviation history. His first book was Raymond Collishaw and the Black Flight. Roger lives in Edmonton. 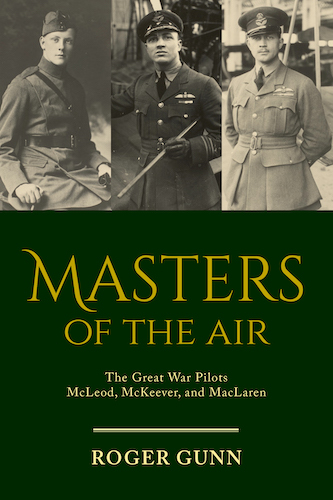 Masters of the Air

Alan McLeod, Andrew McKeever and Donald MacLaren were daring and talented pilots. Although decidedly different from one another -  in personality, in the planes they flew, and in their contribution to the war effort – they shared a passion for flying and a strong sense of duty. One hundred years after they flew and fought for king and country, Masters of the Air brings these three men to life, detailing their development as pilots, their battles in the air, and their near-death experiences.

Like thousands of others, these three men answered the call to fight for the British Empire. In the skies of Europe, they achieved greatness. They performed remarkable deeds in primitive planes, when aviation was in its infancy.

Presentation to the Listowel Legion November 11, 2022

Roger's presentation to the AGS October 27/22

Book Reviews in Over The Front

book review of my books in Cross & Cockade International

An excellent study of a great unorthodox Canadian aviator in WWI, and includes some insight into the fighting between the Reds and the Whites in South Russia during the Russian Civil War.

Wow! How did we miss Collishaw? Bishop & Brown in popular media have been joined by another dedicated Canadian aviator and leader. Thanks for an interesting fast paced read and I hope folks interested or connected with current Canadian defense organizations add this one to their list of must reads.

Excellent book on a forgotten Canadian hero. Roger Gunn is to be complimented for bringing this story alive to remind us of Raymond Collishaw and others who accomplished so much for all of us during those horrific war years. I thoroughly recommend this book, not only to those interested in military history, but also to the general reader.

This book is a most entertaining and well-researched read. Raymond Collishaw seemed always to be right at the heart of some very significant historical events and this book paints a persuasive picture of a real-life Canadian air ace. The section on his time in Russia at the height of their revolution was a real eye opener for me. I thoroughly recommend this book, not only to those interested in military history, but also to the general reader. 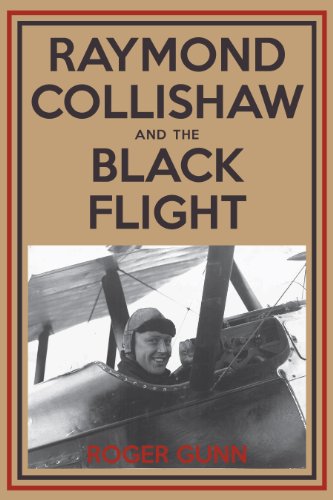 Raymond Collishaw and the Black Flight

Raymond Collishaw and the Black Flight takes you to the Western Front during the Great War. Experience the risks of combat and the many close calls Collishaw had as a pilot, flight commander, and squadron leader. Understand the courage Collishaw and his fellow flyers faced every day they took to the air in their small, light, and very manoeuvrable craft to face the enemy.
‍
As the third-highest-scoring ace among British and Dominion pilots in the First World War, scoring 60 victories, Collishaw was only surpassed by Billy Bishop and Edward Mannock. This book traces Collishaw’s life from humble beginnings in Nanaimo, British Columbia, to victories in the skies over France.

If you have any questions comments or concerns, feel free to reach out and I will get back to you as soon as possible.
Thank you! Your submission has been received!
Oops! Something went wrong while submitting the form.